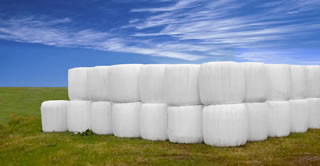 In the spring and summer season, we offer film for silage production of our own. The multilayered film for this application offered by our company is characterized by excellent properties. The film is intended for making of feed for cattle. It is characterized by high flexibility, accurately sealing the bale and effectively protecting its contents. It has features that meet all the requirements and expectations of the recipient.

The multi-layered structure of the film provides a much better barrier to gases and more accurately encapsulates silage. The film has a UV stabilizer that protects it against ultraviolet rays, ensuring greater film durability from the time of wrapping. Similar to stretch film, it is made of the highest quality raw materials, thanks to which it has a high resistance to adverse weather conditions, such as frost, rain or snow, and is characterized by high strength parameters.

The process of ensilaging green mass is now considered the best method of preservation of feed for ruminants. Eventhough it is a cheap method, well-prepared silage guarantees that cows will produce a lot of high-quality milk.

Feeding silage is the most important feed for livestock cattle. They can be prepared on prisms protected with film or bales. The main disadvantage of the preparation in piles is the lack of air supply which causes relatively large losses. Special attention should be paid to the preparation of the silage properly because it is the basis of the entire production process. The film for haylage and the type of agricultural twine, which must demonstrate high strength and resistance to weather conditions, is of great importance.

The advantages of properly prepared haylage are:

It is also worth mentioning the low expenditure of human labour which directly translates into lower costs.

And once again the most importantly properly prepared silage increases the efficiency and quality of milk.

There are many types of silage film on the market, so choosing the right one is difficult. Our film will meet all your expectations and needs. We deliver two colours and the rule is that white film in a situation where the harvest of plants for haylage is carried out in late spring, summer and early autumn, when the air temperature is high. However, in a situation when we harvest greens at lower temperatures, we can use a dark colour film because the low temperature of the air affects the slowdown of the process of ensiling and the growth of acetic acid bacteria.

According to the rules, bales should be wrapped with 4 layers of 0.25 mm thick film or 6 layers of 0.14 or 0.15 mm thick film, respectively. When preserving plants that are not easy to preserve, it is recommended to wrap the bales with six 0.25 mm film layers.

In a situation when the bale is wrapped insufficiently (eg 2 layers), losses in the damaged mass may occur which are several times higher than the saved film cost. According to many studies, the time of getting oxygen inside the bale with haylage wrapped in 4 layers is five times longer than in the case of wrapping 2 layers of film.